I had such an amazing day yesterday!! It was the Philofaxy London meet-up, and it was soooo brilliant! If you ever have the chance to go, please make sure you do!!!
I didn't take many photos, but Steve will be publishing the photos he took soon, so look out for them!


I woke up at 4:30am (after going to bed at 12am because I was trying to make my Filofaxes look pretty!!), and got to the train at 5:35!
It was a good journey- I was in 1st class because the upgrade was only £1.50 extra, and I wanted a quiet journey so I could sleep! British trains are famous for being late, but the journey went great, until someone didn't shut a door properly leaving Reading station, so the emergency brakes went on, and it took 30 minutes to get the train started again!
I departed at Paddington station, and went down on the underground to Oxford Circus, which is central to the shopping area in London (Oxford Street, Regent Street etc), and directly opposite the H&M store I had arranged to meet Susie (http://belzira.blogspot.co.uk/) and her friend Alina!
We browsed in H&M for a while, then walked down Regent Street, going into Body Shop, a very posh coffee shop, and finally J P Books, which is in the Japanese Department store Mitsukoshi, where I bought a notebook and a credit card insert for my Midori Traveler's Notebook!
Then we walked back down Regent Street, and went to the Filofax Shop on Conduit Street! I had arranged to get a replacement for one of my faulty filofaxes from there, because I've had problems with replacements that have been sent to me in exchange for faulty filofaxes being faulty themselves! So I chose an A5 Holborn in Wine as my replacement Filofax, and Susie was shopping for a Boston A5, which happened to be on the 30% off shelf!
Then we left and went to the restaurant, Vapiano. It's a very nice restaurant, and everyone was waiting upstairs! Some people I had met before, but lots I had never met, and I've been reading their blogs and chatting to them on facebook and twitter for ages!! We ate our lunch, then went around and chatted to people, showed off our filofaxes, and of course, did the famous Filofax pile!! 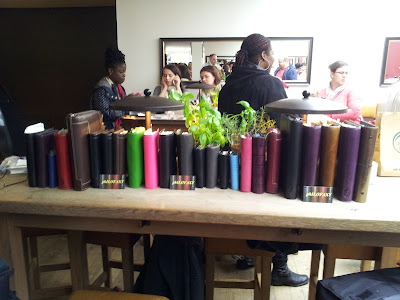 Then we went to the Filofax shop (again, for me!) We browsed the shelves etc, but actually we didn't stay there long. I bought 2 translucent A5 rulers (I've never been able to get them anywhere else!), and an A5 top-opening envelope, because I seem to keep losing mine!
Then we went to the Mulberry store, because Imy wanted to get her Mulberry pink Postman's Lock organiser! BUT... they apparently didn't stock it! In fact, apparently, the organiser DIDN'T EXIST!!???? You should have heard the gasps from us! There were about 10 of us standing around Imy like her posse, and when we heard that she couldn't get her longed-for binder, we were outraged! Not only did they say that they didn't have it, but the shop assistant had the cheek to say it didn't exist because he couldn't find it on the website! Well, of course it exists, because Imy has been staring at it on the website for months! So we insisted he phone the Covent Garden store to see if they stocked it, and when the man came back, they had miraculously found one! After an inspection, Imy found that there were scratches on the metal closure, so we asked if she could have a discount... and the answer was No!!! So Imy didn't buy it from there. And I'm glad, because I don't think the rude staff their deserved her custom!
We walked to Covent Garden, and went to the amazing Artbox!! Oh, I've been longing to go there for absolutely ages! My mum had given me £20 for some birthday money, which I knew I was going to spend all in Artbox, plus some more out of my own money! Below are photos of what I got! I went around once with my little basket, and then decided to have another quick look around the store... big mistake!! Eventually, after putting even more stuff into my basket, it cost £39.50!!! But well worth it!!!
We split up, and Imy, Steve and I went to the Mulberry store in Covent Garden to see if they stocked the organiser. They didn't, but the shop assistant was nice, and he was horrified when we told him that Imy had received terrible customer service from the New Bond Street store, and he said if she ever needs anything, she should contact him!
So me and Imy went to the VERY busy Covent Garden underground station, and made our way back to Paddington with plenty of time to spare! We stocked up on food for our journey home, and even went to the Paddington Bear shop!
On the way home we chatted, looked at our pretty purchases, and chatted some more! I think I talked way too much!!

It was a fantastic day, and now I shall have to start saving up for the next one!! :D

Here are the photos of my haul from yesterday! 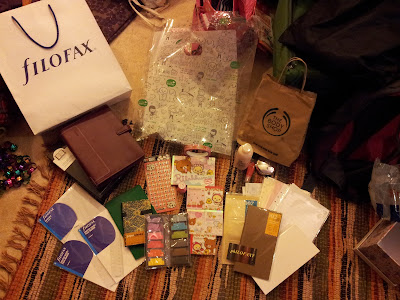 All of my haul- from Filofax shop, Body Shop, Artbox, and freebies!! 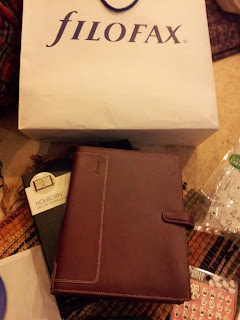 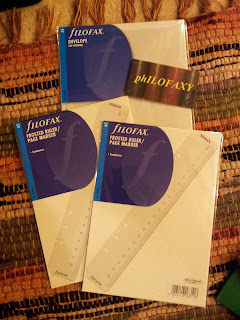 2 A5 frosted rulers, and Philofaxy cards!! 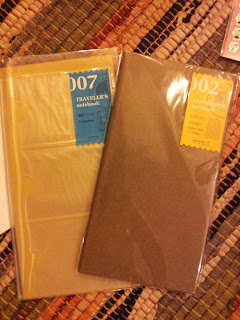 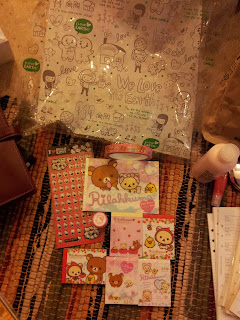 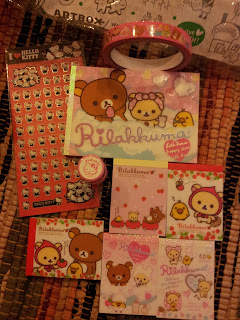 Hello Kitty stickers, Rilakkuma notepads- 1 A6 and 5 A7, Rilakkuma tape, and a Hello Kitty stamp! I bought more than this in Artbox, but as they were out of my birthday money, I have to wait to get them :( 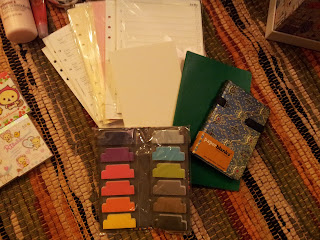 Some very generous people gave me some freebies! I won a competition on Susie's blog, and she said I would get a Moleskine notebook as a prize, but she also gave me a Paperblanks notebook! Thank you sooooo much!!! I love Paperblanks, they are so pretty!!! Christa gave me some A5 inserts which she won't be using, and there are even unopened packets of some things in there!! Susie, Alina and I also swapped some inserts that we won't be using out of our A5s! Ray (http://mylifeallinoneplace.blogspot.co.uk) , who makes amazing Filofax inserts with Steve, and Midori Travelers' Notebook inserts, gave me a lined insert, which was so fantastic, because I have been wanting to print out his inserts for ages, but my printer is broken! And the lovely Lindsay gave me some tabs which I have been wanting for ages, but can't get in the UK!!
Thank you so much, guys!!!

If you are a retailer or product manufacturer and would like me to review one of your products, please email me on bernasconiray [at] hotmail [dot] com.